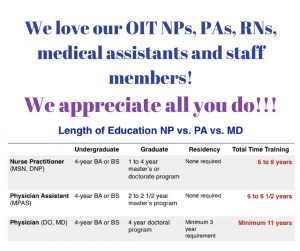 With all the discussions of MD v. PA v. NP, I’d like to put your minds at ease and show you the educational requirements of each position.

The issue we had recently was that several NPs and PAs have started their own companies offering OIT for up to $17k, offering training to questionable trainees, messaging and calling me asking if I will lead interested doctors and potential patients to them, and asking me to place them on our OIT Provider List saying, “We know more than most doctors.” Then they told me they trained an office on our List and ran their entire OIT Program–that their names should be on our List.

I contacted the doctor several times and was told they would consult and get back to me. Before that could happen, members started messaging that their children were “made sick” and ask me what to do. They said they could not speak with an “actual allergist.”

I contacted the doctor again. There was confusion why doctors could not be reached and, at last, clarification that the NP was Director of the OIT Program. The doctors asked if I’m comfortable updating the site to include the NP and PA. On a following email the doctor indicated they have a large practice and…

“Under no circumstances is a patient being seen for OIT without a doctor in the office. There is ALWAYS an MD allergist on site at the office where OIT is being done.”

Our Admins and several doctors have been consulted since I was first contacted by the NP/PA, both of whom may or may not still work at the study location. So there are the private companies, the actual allergy offices, the study network, and members contacting us asking for help. Only one doctor said he’s sure they are acting with the approval and supervision of the Lead Reseacher of the study. So, at the study, they are supervised by the Lead Researcher. At the PPOIT offices, there are board certified allergists present. In their companies, I don’t know who is supervising them?

Whatever the case, this is another situation where it is simply not in our best interest to maintain the connection. Had members not complained, my attention would have been elsewhere. It’s not like I go hunting to remove doctors from our List. Even knowing there was some interlacing of all this facilities, part of me did not want to know. So I did not pursue it. Until the parents reached out and then I felt awful. If they have their own patients, and children do not do well, that is terrible, but at least I did not send them that way.

When you go to your OIT appointments, and your PA, NP, RN, LPN, and medical assistance are there to care for you, rest assure they are truly supervised by the physicians on our List. Never once has a doctor or supporting staff member reached out for me asking for someone to train or treat. It’s actually quite the opposite. I apologize almost every day for overloading our doctors with information and requests for help.

And even though I am not paid or medically trained at all, besides baby lifesaving classes and CPR training, I consider all of our doctors my “supervisors.” I cannot do what I do for you without them. People hear the word “doctor” and want to charge all of us 5x more for any product or service. And these are the doctors who are literally saving our lives. Even though their professional organizations have kept the information from them, twisted the actual success of OIT, and then ostracized them for offering treatment to us. If there is something I can do to preserve their role in medicine, including their staff, I will. Their staff helps them to function and treat as many patients as they can safely, so I do what I can to help them too.

What happened recently is different and should not bleed into how our offices truly function. When you see your PAs, NPs, and medical support teams, give them great big hugs and tell them how much you cherish them.

For more detailed information on the expertise of NPs and PAs, check out this link: https://www.mastersinnursing.com/guide/nurse-practitioner-vs-physician-assistant-which-career-is-right-for-you/