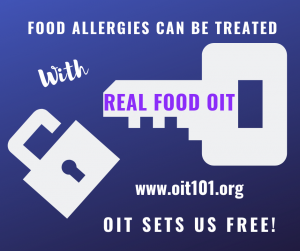 So I guess we run around chasing news stories this week.

Drug versions of OIT are fast tracking the FDA for approval. Would you prefer a propriety drug version or REAL FOOD OIT? Does it bother you that for a decade the same researchers who proved OIT is “safe and effective” held out on educating the allergists of the world until they could manufacture a product for profit? The contents are unknown, the initial doses are too high for many food allergic people, and the cost is $5-10k for the first 6 months and $400 a month for life. Stop popping your pills and go back to being allergic.

Here is my comment on one news channel website. I suggest you write and copy your responses to save time. This is #4 and I’m sure the pharma co. is just getting started. Medicine is great, don’t get me wrong. But this is unnecessary.

For the food allergy community members who demonized OIT and the patients, see OIT does work. It works so well that they withheld it from you until they could charge you.
www.oit101.org #oitworks

Comment:
My son has been eating 8 peanuts/ day for over 8 years thanks to the Private Practice OIT Allergists who have been offering OIT (oral immunotherapy) for over a decade. With over 50,000 members in our FB OIT support groups who have been through or are looking for private allergists to desensitize their children or selves, we do not want a propriety pharmaceutical verion of food that is already approved and in our local grocery stores–the same food that is served in restaurants, schools, and in the REAL world. REAL FOOD OIT is what people deserve, need, and want.

These very same researchers, who are now on the boards and “employees” of these drug companies, proved back in 2009 that OIT is “safe and effective” without accessory drugs or in a capsule formula but they were more interested in mass producing a product for profit instead of arming and educating the allergists to practically treat their own patients. Yes, it might save time to have a pill form of REAL FOOD. But we need those tiny measurements to avoid reactions. My son would not have been able to consume the starting dose of that pill. But his allergists, who left the Duke OIT study and started his own practice to treat food allergic patients, measured his doses to a minuscule amount he could handle. We’ve been doing OIT with our private allergists for over a decade now.

On oit101.org we have a list of providers who specialize in OIT. It’s not something to do at home. You do need medical supervision. But you don’t need a drug version of REAL FOOD. Dr. Mayer has been on our list for many years and has helped educate our online community and doctors. The medical community is lucky to have him. He was actually the first doctor I know of to think of putting peanut flour in a capsule. I told him he should patent it but he said peanut flour is already approved. So what’s in this product?